US banks will face up to $320 million in credit write-offs this year due to the pandemic, according to a recent report from consulting firm Accenture.

The economy is running on borrowed time and money, as government stimulus props up shell-shocked businesses and the accounts of tens of millions of jobless Americans.

As governments start to lessen the public stimulus and nudge people to private-led debt, a larger burden will fall on the banking system.

“Banks will play a critical role in helping absorb the economic impact of the global pandemic and stimulating a rapid recovery for consumers and small businesses,” said Alan McIntyre, a senior managing director at Accenture who leads its global banking practice. “As public programs wind down, the burden of holding extra capital to protect against credit defaults will fall on banks’ balance sheets.” 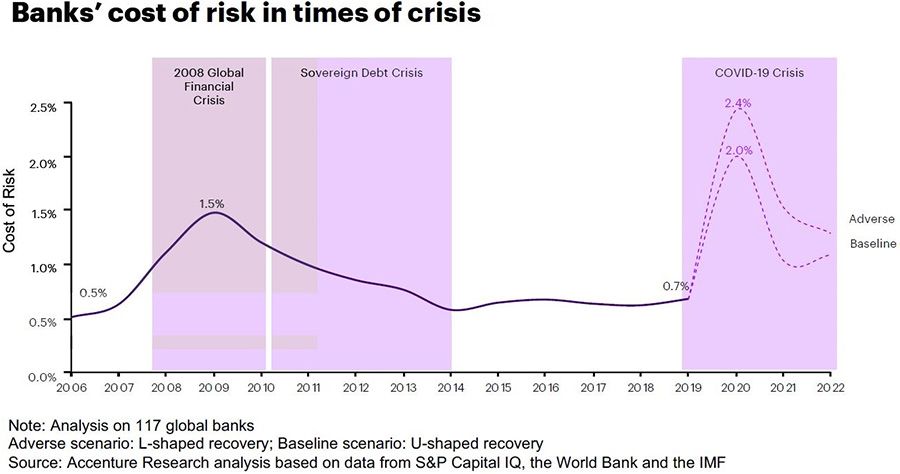 Globally, banks will have to set aside 2.4% of existing credit books to cover expected losses on unpaid loans, nearly double what was written off in the financial crisis of 2008.

The future travails are already becoming apparent. In the US, home loans in forbearance rose to 9% in June, up six points from March.

In addition to their existing loan books, banks will also have to make decisions about where to extend new credit as government stimulus taps sputter. In an increasingly debt-driven economy, public and private debt could rise to $200 trillion by the end of 2020, according to Accenture.

“Banks will have to maneuver carefully to strike the right balance between rescuing individual and small business customers and protecting their own profitability and solvency,” McIntyre said. “This will require difficult decisions around which credit extensions will help an ultimately financially viable customer versus delaying the inevitable delinquency.”

A strong data and analytics approach will help banks better determine the health of businesses, which may be masked by furlough and payroll protection schemes. A data-driven view will give banks a broader context of the current environment, as well as how consumer behavior has changed.

US banks will also need to scale up their credit management resources and collections capabilities quickly, as many of these units have shrunk to barebones teams in the past number of years, according to Accenture.

And though banks may be tempted to pull back dramatically on lending, demand for credit will ultimately be met, either by non-traditional lenders – such as big tech and fintechs – or by companies offering financing for their own products and services.

“If banks attempt to aggressively reduce offers of credit, what might start as a slow trickle of customers turning to alternate lenders could quickly become roaring rapids that can drastically change the tide of lending,” McIntryre said.