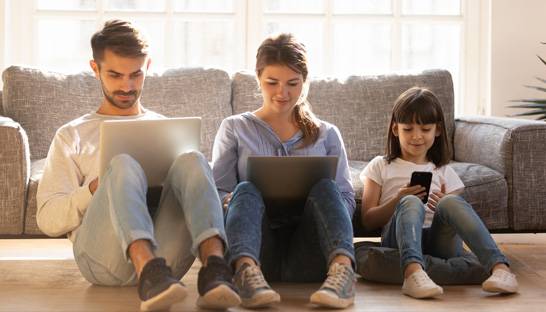 PwC reports that lower spending is a product of the current economic uncertainty, while other trends in consumer behavior – such as a transition to online – might be here to stay for the long term.

The Big Four accounting and advisory firm conducted a survey among consumers in more than 25 territories across the globe before the Covid-19 crisis hit, seeking its regular roundup of consumer insights. Following the outbreak, PwC followed up with a smaller survey in nine key global markets to gauge the pandemic’s impact.

Perhaps the biggest change has come in spending, stemming primarily from income insecurity due to job losses. Millions of jobs have disappeared in the wake of the crisis, as a sudden revenue shock turned all attention to cost-cutting measures. More than 40% of consumers in PwC’s survey have seen their income fall due to a job loss. Some have seen their income flowing out for healthcare services to care for affected family members.

Add to this the fact that being at home for extended periods has led to a dramatic increase in day-to-day household spending such as electricity, heating, and groceries. The combined strain on finances is dampening consumer sentiment. PwC reports that more than a third of global consumers plan to spend less in the near future – a figure that has doubled since the pre-crisis survey.

There is likely to be a knee-jerk reaction as the economy starts to reopen, with a third of consumers also expecting to spend more in the next few months. Nevertheless, this figure has also taken a 10% hit since before the crisis. Interestingly, economies in Europe appear more likely to see a spending crunch than economies in the Middle East and China.

Those who spend, meanwhile, are likely to have new priorities and preferences. Globally, experts have noted that consumers are going “back to basics.” Rather than pursuing luxury goods and the status-seeking that comes with them, many are happy to shop for essentials required for a healthy lifestyle.

Even as lockdown restrictions lift in towns and cities across the world, PwC finds consumers are less inclined to go out for a meal, to the shopping center or to the cinema. Priorities in the post-crisis period have become safety and accessibility, as fear of infection persists in the minds of consumers. According to PwC, this has become a catalyst for online commerce. 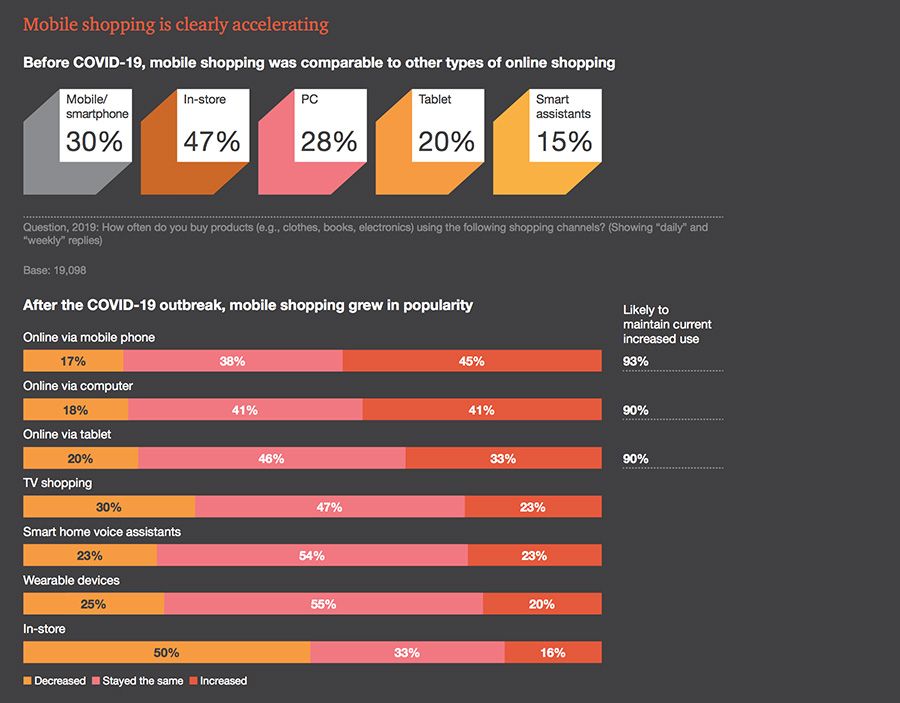 No other platform can offer the safety and convenience of online shopping. As digital sales channels become more advanced and creative, online sales – which were already on the rise before the crisis – have seen a significant spike in markets across the globe.

“Not only has the COVID-19 outbreak reinforced the already growing trend of online shopping, it’s encouraged experimentation, coaxing consumers to explore different ways to access products and services and accelerating certain behaviours that have long been simmering in the background,” wrote the report authors.

One such trend is the use of mobile devices for online shopping, which has seen a 45% increase throughout the crisis. Computer- and tablet-based purchases have also seen significant increases. What is striking is that these trends appear to be here to stay, with more than 90% of respondents to PwC’s survey indicating that they will likely maintain this increased use of mobile and online shopping channels.

In-store shopping, meanwhile, has seen a 50% drop. Groceries in particular have seen a sharp rise in e-commerce terms, with a more than 60% jump in the purchase of groceries and fresh produce online. Again, around 90% of consumers are likely to continue this behavior in the near future.

As mentioned, safety is a key driver of these consumer trends. Closely related is an increased focus on health in general. Experts have suggested that the lockdown has led many to use the extra time available to adopt a healthier lifestyle. PwC reports that self-care has become a distinct priority among consumers.

Nearly 70% of PwC’s respondents have been taking better care of their mental and physical health during the crisis, while nearly two-thirds have increased their focus on medical needs and diet. The report points out that this trend appears to be particularly dominant in the worst-affected countries, such as China and Italy.

Once again, this trend is not necessarily new. Self-care was becoming a priority before the pandemic as well. Similar to online commerce, the crisis and the resultant lockdown has only served to accelerate this trend. While the lower spending, preference for online and health consciousness are all signs of new personal priorities, PwC reports that this new wave of conscientiousness is impacting all areas of consumer priorities. Sustainability of business and lifestyle, for instance, have also come into sharp focus.