Covid-19 impact could reach 57 million jobs in US 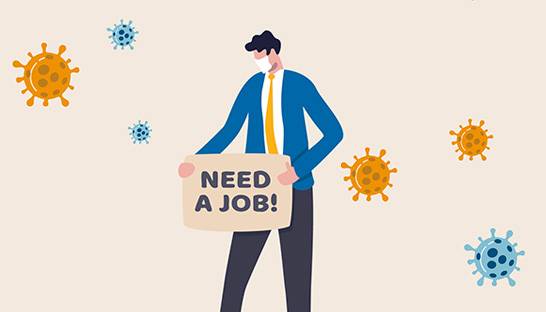 Up to 57 million US jobs are vulnerable – encompassing permanent layoffs, temporary furloughs, and reductions in hours and pay. The sobering figure comes from a report on jobs from McKinsey Global Institute, the think tank arm of the strategy consultancy.

While the number of US applications for unemployment stood at 26 million in the five weeks leading up to April 18 – the time period examined by the report – the number of unemployment claims has now reached 33 million. The unemployment figures don’t paint the whole picture, as nearly twice as many workers are also vulnerable to reduced hours, pay cuts, and temporary unpaid leave, according to McKinsey.

The initial wave of job losses hit food service, entertainment, and accommodations as lockdowns and social distancing policies began. Since then, there has been a pullback in consumer spending, leading to job losses in business services, manufacturing, retail, and non-essential healthcare.

The job losses will continue to grow, according to the report. Strained budgets are forcing local and state governments to start cutting jobs, while colleges are anticipating cutbacks and nonprofits hit by a drop in charitable giving also face layoffs.

The occupations seeing an increase in postings on jobs are for the most part, predictable. Translators have seen a huge spike in demand as hospitals have added interpreters to treat non-English speakers. Respiratory therapists, psychiatrists, surgeons, and other health professionals are also in high demand.

Low-wage and part-time jobs were more likely to be vulnerable jobs, according to McKinsey. As of mid-April, nearly 75% of all vulnerable workers earned less than $40,000 per year. Meanwhile, part time workers accounted for 18% of workers pre-crisis, but were 46% of workers newly unemployed in mid-March. 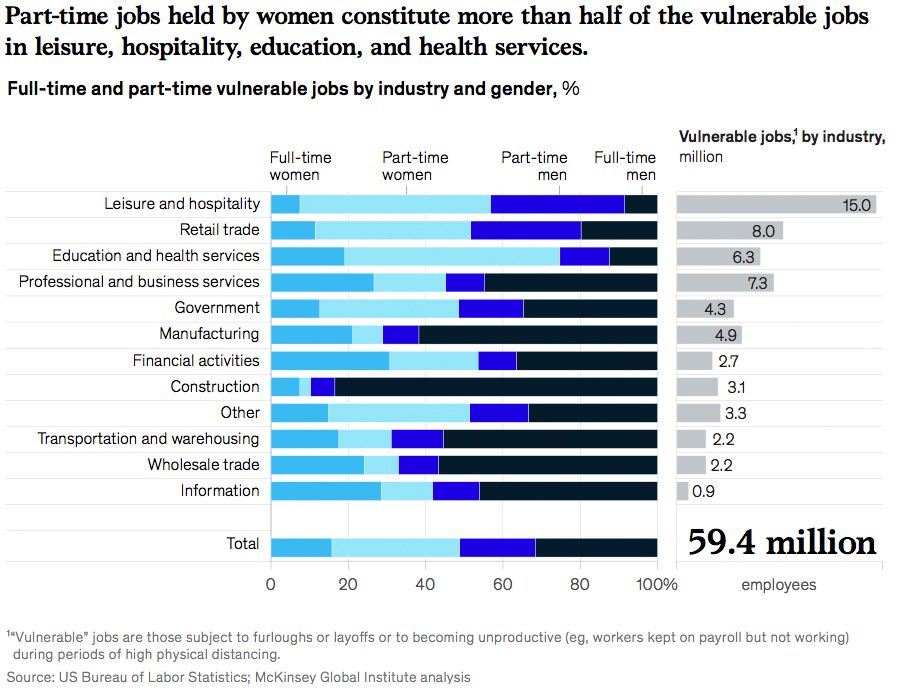 Younger workers were also more likely to hold vulnerable jobs, with many lacking seniority and being likelier to hold part-time positions. According to McKinsey, workers under 35 were 36% of the labor force, but made up 49% of the newly unemployed.

Racial minorities were likelier to hold vulnerable jobs, making up 20% of the workforce but 25% of the newly unemployed. This is linked to many holding jobs which cannot be worked remotely, such as those in retail and hospitality. White workers were 37% more likely to hold jobs that can be performed remotely.

Women made up 59% of initial job losses, since they account for approximately two-thirds of the workforce in hospitality, retail, education, and health – industries that drove 80% of the job losses to March 14. Women also held 64% of part-time jobs – the first to be cut in a downturn.

However, McKinsey notes that the gender skewing may rebalance in the future, as men are actually 10% more likely to hold vulnerable jobs. Though male-dominated sectors such as construction and manufacturing were less impacted in March, they will likely be harder hit as the crisis wears on. In fact, McKinsey says the two sectors hold as many vulnerable jobs as retail.