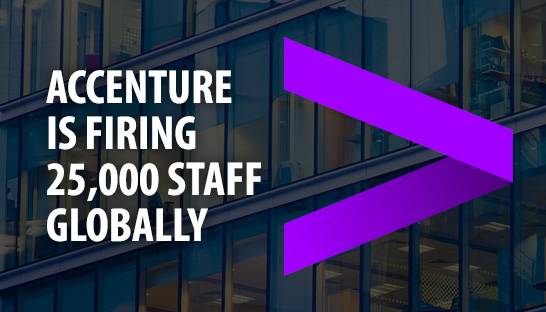 Accenture has launched a major cost cutting program to counter the negative impact of the Covid-19 crisis. A total of 25,000 staff will lose their jobs in the coming weeks.

Globally, Accenture has around 500,000 employees, making it one of the world’s largest professional services groups. The Dublin headquartered company specializes in four areas: management consulting, technology, innovation and outsourcing. In an internal global staff meeting, chief executive officer Julie Sweet confirmed to company leaders that the firm will have to offload 5% of its global workforce.

The move was described by Sweet as inevitable, amid the fallout of demand caused by the Covid-19 pandemic. Similar to other professional services firms and the larger consulting firms, including the Big Four, Accenture is seeing a significant part of its project-based work either delayed or cancelled altogether, as clients apply cost cutting rigor to their external spending.

In the US, Wells Fargo has cut its external hiring by hundreds of millions, and vowed to slash a staggering $1 billion from total consulting spend in the next years. Globally, airlines such as Delta, Air France, Lufthansa and Qantas have waved goodbye to practically all their consultants, and meanwhile, in sectors such as tourism, travel, hospitality consultancy work has come to an abrupt halt. According to one estimate, the global consulting industry will see one fifth of its value evaporate this year as a result of the Covid-19 pandemic.

Despite cutting its own base of subcontractors and halting fresh recruitment, Accenture needed to further reduce costs. Having enjoyed an “incredible year” according to Sweet up to the end of February, growth has collapsed from 8% then to the current 1%. But as the pandemic continues to bite, analysts fear that growth may soon be reversed.

Meanwhile, in what is a traditional approach to Accenture’s mode of business, much of the growth was fueled by acquisitions. The firm has closed 20 acquisitions in 2020 alone, and while many of them still have not been consolidated into financial numbers, the M&A engine was equally hot last year, cementing the impact of M&A to its current year to date results.

Highlighting the need for slashing headcount, Sweet pointed at Accenture’s chargeability – the % of hours employees spend on services paid for by clients. In the past quarter, for the first time in a decade, the consulting giant saw its chargeability drop below 90%, meaning that one tenth of its workforce capacity is ‘on the bench’.

While consulting firms can afford to have chargeability rates of as low as 75% to break even (depending on rates), the alarming development has sparked the firm to act swiftly. A group of ‘low performers’ have in the past months been shown the door, while another group of benched professionals have been told by their superiors that they should find project work soon or else will be made redundant.

Another group of professionals has been asked to “improve their skills” so they remain fit for purpose, in light of a rapidly changing environment. “We’ve identified people who need improvement … So we’re making sure that if we have to make other actions, we know where our performance is.” This may be a smart way of pre-sorting its workforce for a potential second wave of redundancies, if the Covid-19-induced downturn persists.

In parallel to the reorganization, Accenture has also launched a tweaked performance management system, which is causing a stir among partners and staff. Some employees have voiced their concerns on career blog sites that the appraisal system is being abused as a means to silently lay off people.

The system asks managers to apply ratings including ‘non-performing’ when key stakeholders are displeased with their work. However, in some cases, particularly when layoff quota where not met, workers that performed reasonably have been found to be reclassified as underperformers to meet the target. In particular in India, where Accenture has over 200,000 employees, signs of such practices have surfaced.

The news – which was broken exclusively by The Australian Financial Review – comes during a blackout period for Accenture, where company performance is not disclosed, ahead of a scheduled earnings announcement on September 24.