Global merger & acquisition activity in the consumer and retail sector collapsed by over a third last year, according to a new report by Kearney, in what is the largest decrease since the 70% crash in deal value observed during the global financial crisis.

According to the report’s authors Bahige El-Rayes and Robert Haas, there are a number of reasons for the drastic decrease. Obviously, an environment filled with uncertainty on the back of trade wars, brexit, and a looming US recession did not help. 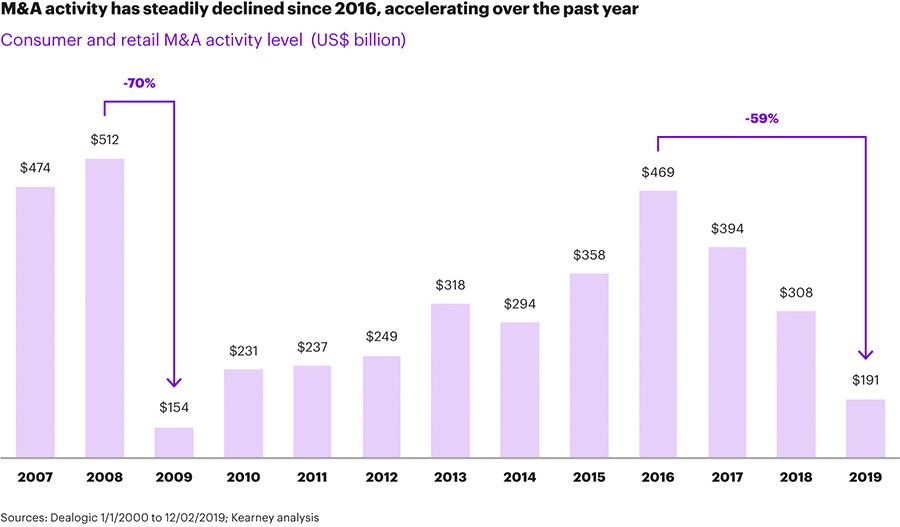 The report also pinpoints a heating dealmarket as a blocking factor. A decade of peak activity fuelled by economic expansion has led to a consolidation wave and a narrowing deal pipeline, seeing deal activity plateau due to the saturated M&A market, exacerbated by record-high valuation multiples.

Meanwhile, CxO’s – in particular of large players in the industry – have become more critical of their merger & acquisition investments, in light of growing integration complexity amid a decade of bolt-on and digital transformation.

This has led to higher than expected costs and less value creation than anticipated, said New York based partner Haas, a feat backed by a Kearney survey of 100 consumer and retail leaders that found that 45% of executives reported that their recent M&A had not been accretive. 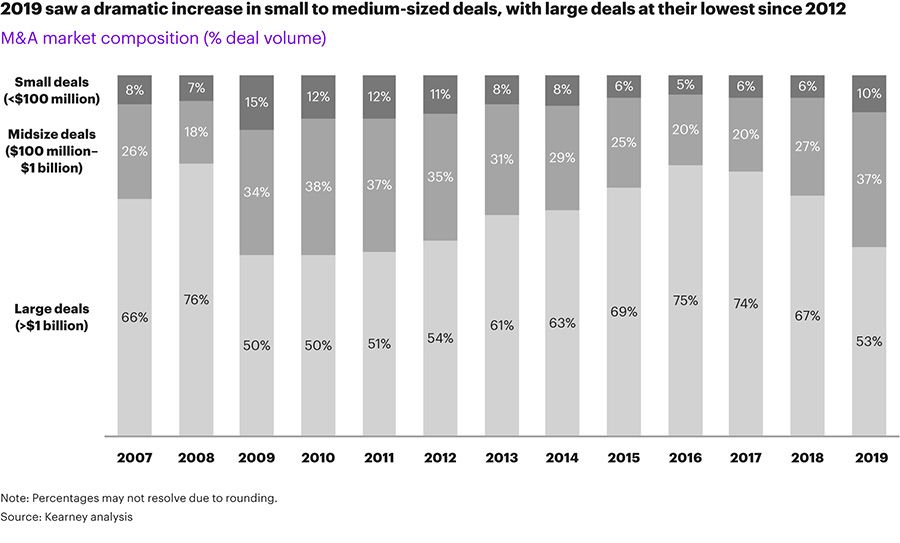 More than half of the deals closed in 2019 were so-called scope deals – transactions aimed at diversification in geographies, capabilities, or industries, as opposed to scale deals that mainly focus on expanding market share.

In order to mitigate risks, buyers have been turning to smaller and less risky deals, a trend that is expected to continue into 2020. This year, 69% of consumer executives and 47% of retail executives will be looking for assets less than $500 million in valuation,” said El-Rayes.

On the outlook for the current year, the authors signal a mixed bag. “Despite the likelihood of economic softening, we fully expect to continue to see an active M&A market,” said El-Rayes, adding that 2020 will be a buyer’s market that provides an “unprecedented opportunity” to acquire quality consumer and retail assets at corrected valuations.

Indeed, in Kearney’s poll, 70% of executives surveyed said they believe now is a good time to invest, despite the current covid-19-induced downturn. The short term will see a spike in “recession deals like distressed sales and carve-outs of select premium assets,” said Haas, but as time passes by, bolder strategic transactions will emerge.