Consulting firm Oliver Wyman projects that Covid cases in the US could spike to 5 million in August and 6 million in September, according to the firm’s Pandemic Navigator modeling tool.

The consulting firm’s forecasts are featured on the Centers for Disease Control and Prevention’s website, alongside other leading models. Oliver Wyman anticipates approximately 6 million Covid cases in the US before the end of September if the country stays on the current path.

Most major metropolitan areas have a “high” proprietary risk score from Oliver Wyman, except for NYC and Boston, which were hit hard in the initial Coronavirus wave in April and subsequently locked down. Cities in the South, which avoided the initial surge, are continuing to push up case numbers. 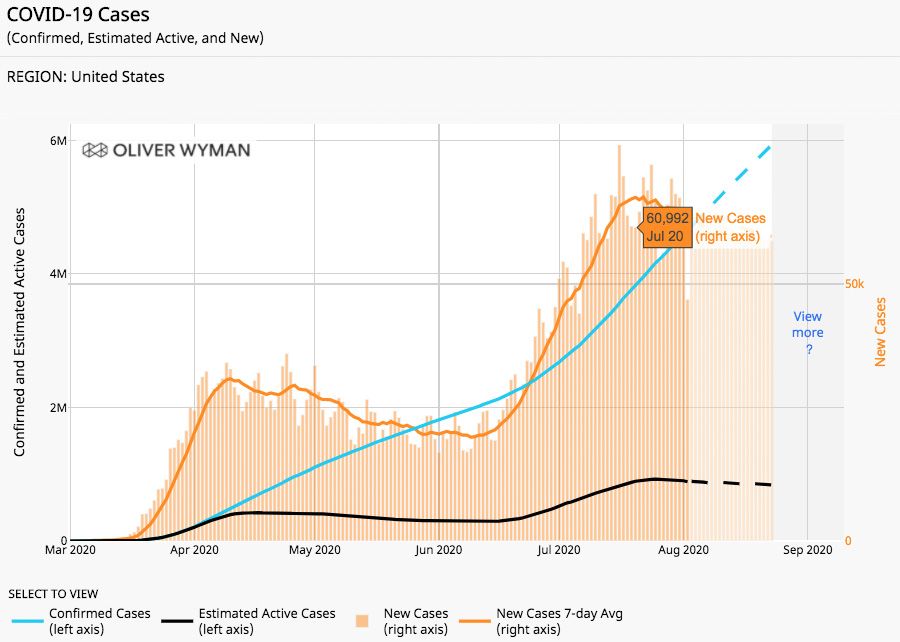 Particular hotspots include Florida, Louisiana, and Mississippi, which have more than 6,000 active cases per million people. Vermont and Maine have the lowest active cases/per million, at 122 and 202, respectively.

“The recent resurgence led to almost 1 million active Covid cases, concentrated in select states. Even with strong containment efforts, it will take multiple weeks to bring the number of active cases down to a manageable level,” said Ugur Koyluoglu, Oliver Wyman partner. “If we want to see economic recovery and a return to a re-envisioned normal in the second half of this year, we must drastically shift our culture and embed critical behaviors into our daily lives across states, employers, and individuals.”

Oliver Wyman’s analysts pointed to a rushed reopening process for a spike in certain states and cities. “Moving rapidly from one reopening phase to the next, without being sure the geographic doesn’t experience a subsequent and significant uptick in cases with each stage of reopening, allowed active infections to continue to circulate in the community,” they said.

Another factor is some consumers’ refusal to wear masks, which has become a political statement on personal freedom rather than a simple action for collective public safety.