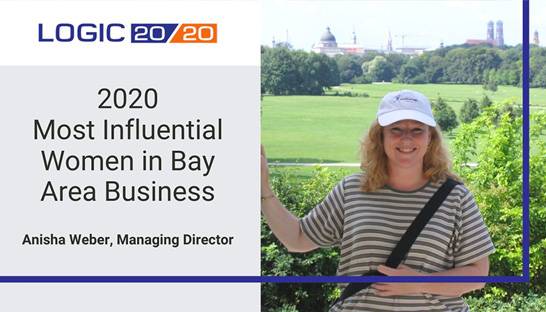 Anisha Weber, a managing director at management and technology consultancy Logic20/20, was named one of the Most Influential Women in Bay Area Business in 2020 by the San Francisco Business Times.

The annual list recognizes approximately 100 outstanding leaders who have made a difference in their organizations and their communities. The list celebrates women business leaders across a range industries, including real estate, tech, law, finance, healthcare, and consulting, among others.

As a managing director at Logic20/20, Weber is responsible for people and operations, while also working on client strategy, solution delivery, and corporate culture. She has more than 25 years of experience in digital transformation.

Weber previously spent 20 years at Primitive Logic, a San Francisco-based technology consultancy that was acquired by Logic20/20 in late 2019. Between 2016 and 2020, she served as Primitive Logic’s chief operations officer. During her two decades at Primitive Logic, she worked on numerous consulting engagements with high-profile clients in the tech and financial services industries, including Oracle, Synaptics, Nvidia, Bank of America, and Charles Schwab.
Before joining Primitive Logic, Weber was a consultant at Andersen Consulting (now Accenture), where her work included partnering with PeopleSoft to develop their Financial Analytics package.

For the last seven years, she has served as a commissioner on the San Mateo County Commission on the Status of Women, which advocates for the interests of women in the county. Between 2018 and 2020 Weber was president of the commission. Her work has focused on topics ranging from STEM education for young women to human trafficking.

During her career, Weber has worked to support the advancement of women colleagues in technology and management consulting – industries which have been historically dominated by men. “I am most proud to have supported the growth of over 40% of the women in our company,” Weber told the San Francisco Business Times.

When asked who was her inspirational mentor, Weber said, “I stay curious and learn from everyone I interact with, so I have many inspiring coaches. Jane Goodall said, ‘Change happens by listening and then starting a dialogue with the people who are doing something you don’t believe is right.’”