Bain & Company appoints 16 partners in US 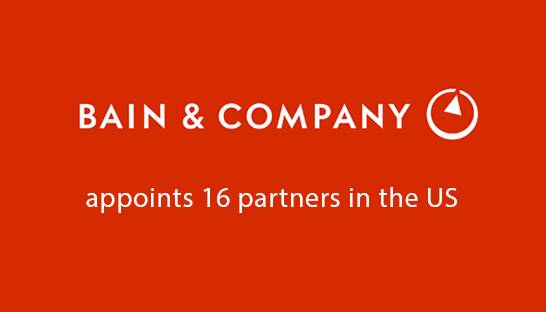 Strategy consulting firm Bain & Company has promoted 16 US-based team members to the firm’s partnership. The US promotions are part of 45 partner appointments across 27 global offices in the first half of 2020.

Dan Brenner (Seattle) specializes in advising retail and consumer packaged goods clients. He previously was global leader for Amazon Prime Pantry and VP of CPG and channel development at Starbucks before rejoining Bain in 2018. He previously was a manager in the firm’s CPG/retail practice between 2005 and 2011.

Tess Dearing (Boston) focuses on supporting private equity clients. She joined Bain in 2013, and became a principal last year. She previously was a financial analyst at the Yale Investments Office.

Karen Harris (New York) is managing director of the firm’s Macro Trends Group, which develops Bain’s insights on macroeconomics, macro social trends and geopolitics, and industry-led innovations. She has been with the firm for 20 years, and previously worked at strategy firm L.E.K. Consulting.

Prashant Iyer (Chicago) advises clients in the aerospace & defense and industrial services industries on growth strategy, performance improvement, and transformation. Before joining Bain in 2013, he was an associate at H.I.G. Capital and an investment banker at Citi.

Courtney della Cava (San Francisco) leads the Bain Executive Network and is a member of the firm’s talent practice, where she advises clients on leadership development and human capital strategy. She has worked at Bain for nearly 20 years.

Patrick Gaddie (Chicago) supports private equity clients with advice on strategy and due diligence, among other areas. Gaddie has spent 11 years at Bain, becoming a principal in 2017.

Yael Mohan (Boston) joined Bain in 2005, and has led 35+ projects with clients across a range of industries and strategic challenges. She became a principal in 2017 in the Boston office, and previously worked at Bain’s Atlanta and New York offices.

Joe Scavongelli (Boston) has been with Bain for 14 years, and became a principal in 2018. He previously interned in the marketing function of the New England Patriots when he was completing an MBA at Harvard.

Mayuri Shah (New York) has been with Bain for 10 years, and became a principal in 2019. She was previously a summer intern at Google when she was completing an MBA at Wharton.

Michelle Paratore (San Francisco) is a consultant in the retail, private equity, and consumer strategy & marketing practices. She has worked at Bain for 11 years, and has advised numerous clients across the retail sphere on brand and costumer strategy, channel excellence, human-centered design, and commercial due diligence.

Martin Quinn (Boston) has worked at Bain for seven years, joining the firm after a summer internship during the completion of an MBA at the University of Chicago. Quinn was previously an analyst at Decision Resources Group, a provider of healthcare research, data, and technologies.

Travis Wibracht (Dallas) is a leader in the firm’s performance improvement and retail practices, and is also product leader for sales & operations planning (S&OP) in the Americas. Wibracht has worked at Bain for the last nine years, and was previously an investment banker.

Nadya Yankovskaya (New York) advises on M&A, organization, customer strategy and marketing across a variety of industries, with a focus on consumer products and retail. She has worked at Bain for over 10 years.

Jon van der Veen (Washington, DC) is a leader in the customer strategy and M&A practices, and advises a range of industry clients on strategy and operations. He has been with Bain for the last eight years, and became a principal in 2018. He was previously a senior associate at PwC and a senior financial analyst at Quantum, a data storage firm.

Daan van Ginneken (San Francisco) is a leader in the technology and enterprise technology practices, and has advised numerous clients across retail, healthcare, and telecom on digital and operating model transformation. He has worked at Bain for over a decade. Van Ginneken has a background in aerospace engineering, and was previously an engineer at Lockheed Martin and co-founded Dutch startup DelFly.

“We welcome these talented individuals to our leadership team and celebrate their client results as well as their commitment to the values of our firm,” said Manny Maceda, CEO of Bain & Company. “Thirteen of our most recent promotions to partner are women and our newest partner class represents 27 of our global offices.”