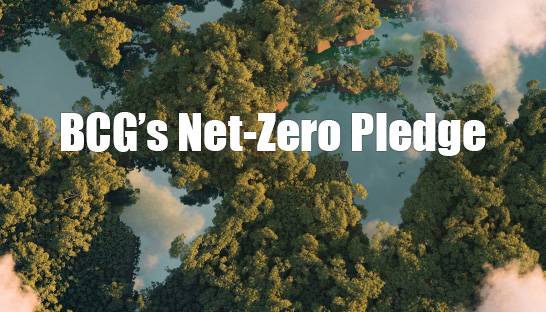 As the effects of climate change become more pronounced, the world’s largest businesses are struggling to build for economic growth without harming the planet with its carbon output. While most are simply aiming for net-zero carbon, however, Boston Consulting Group has announced it will take things even further, by aiming to be ‘climate positive’ by the end of the decade.

In recent years, one of the most common ways in which businesses seek to improve their sustainability efforts is carbon-offsetting. This process consists of a reduction in emissions of carbon dioxide or other greenhouse gases made in order to compensate for emissions made elsewhere. While paying to plant trees is thought to be the most effective method of this, it can also include sponsoring solar and wind-power projects, or even capturing methane released from land-fill sites.

The last few months have seen carbon-offsetting cited by a plethora of major consulting firms declaring themselves to be ‘net-zero’ carbon, or to be aiming for as much within a short amount of time. Global management consultancy BearingPoint said that the global travel of its consultants and staff was CO2-neutral as of December 2019, following the launch of a massive carbon-offsetting initiative, while in February, Big Four giant EY announced plans for the firm to become fully carbon neutral by the close of 2020, on the back of off-setting measures.

The world’s largest strategy consultancies have also been rapidly readjusting their environmental policies, in order to help find new ways of growth without sacrificing the health of the planet. MMB firm Bain & Company recently marked its ninth year of carbon neutrality – reducing and offsetting its flights, taxi and train rides and all the energy required to power its 58 global offices. Now, rival Boston Consulting Group (BCG) has stated it will go one further – setting a goal to be ‘climate positive’ by 2030.

BCG aims to remove its remaining footprint with “nature-based and engineered solutions” at an annual average of $80 per tonne by 2030. Beyond this, becoming climate positive means that BCG intends to remove more carbon from the atmosphere than it emits after 2030 – and the firm has committed a hefty $400 million toward making that a reality over the current decade. 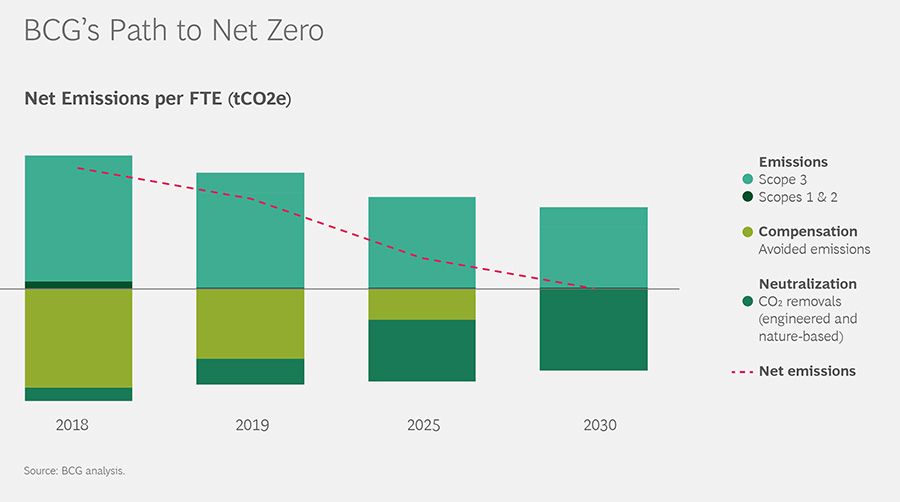 A statement on BCG’s goals said, “While our single greatest impact will come through our client work, we also want to lead by example by reducing the negative climate impact of our own operations and value chain. The world needs to reach net-zero carbon emissions by 2050, but those that can move faster should do so. This is why we are committing to reach net zero by 2030. As we progress, we will continually learn, innovate, and collaborate.”

In order to achieve its goals, BCG stated that high-quality data would be the backbone of its programme. The firm is committed to measure, analyse, independently verify, and report its progress toward its net-zero climate goal in its Annual Sustainability Report. It will use this to gage how well it is moving toward goals on direct and indirect emission reductions, as well as value chain emissions – such as business travel – which currently make up 80% of BCG’s total footprint.

At the same time, while BCG has been carbon neutral since 2018, it has achieved this by compensating for its remaining impact by purchasing independently verified carbon credits. To be truly net-zero impact, it will need to transition to 100% carbon removal solutions by 2030, including both nature-based and engineered solutions.