Corporations bag $3.2 trillion in profits, but ‘golden era’ may be over 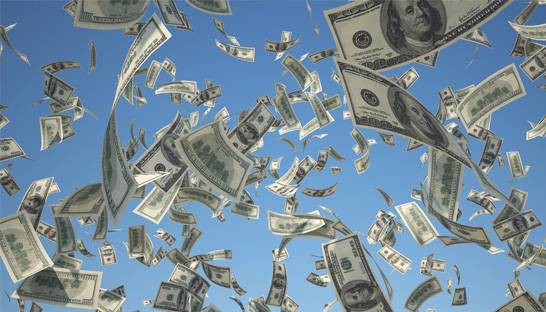 Corporations in the developed world raked in $3.2 trillion in 2018, having ridden a wave of record returns for the past three decades. However, a recent Bain & Company and Oxford Economics report says the golden age of profitability for corporates may be coming to an end, as market dynamics shift and backlash from government and society becomes increasingly probable.

Since 1990, the GDP in the developed world has grown by a solid 3.6%. Corporate profits, in contrast, have grown 7% annually, churning out profits at historic rates despite the dot-com crash and the 2008 financial crisis.

Bain says that corporate profits were showing signs of peaking even before the economic cataclysm of the Covid-19 pandemic. The pandemic will, however, accelerate the market dynamic shifts and government policy that are expected to dampen corporate profits in the future.

Over the past several decades, six factors have powered the steady rise of corporate profits:

1) Labor’s waning bargaining power as unionization has declined and labor supply has expanded
2) Financial liberalization that drove up the profitability of financial services
3) Globalization, which unlocked lower cost supply chains and new export markets
4) A commodity supercycle driven by industrialization in the China and India
5) Rise of internet platforms which have raked in enormous profits for a small number of firms
6) Automation, which has fueled the displacement of labor with capital

These factors have been especially strong in the United States. But the profit gains have overwhelmingly favored large corporations (greater than $25 billion in revenue) compared to small firms (less than $1 billion). The return-on-equity for large companies in the 1980s was 1.3 times greater than small firms, while the ratio has expanded to 4.2 times in the 2010s.

A reason for this is that technological change has increased the benefits of scale, widening the profitability gap between large and small corporates. Increasing economies of scale have coincided with a surge in M&A, leading to high concentrations in many sectors. Today, 1% of public companies in the US account for 41% of corporate profits, up from 33% in the 1980s. 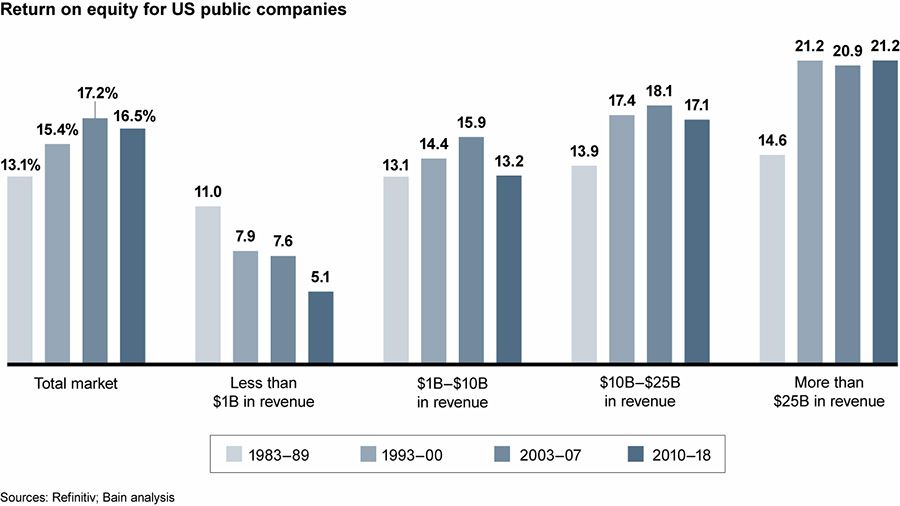 “While average profitability has been steadily rising, median profitability has actually fallen,” said Andrew Schwedel, partner at Bain & Company in New York and co-chair of Bain Futures, the company’s think tank. “Large firms have grown larger while mid-sized firms have increasingly relied on leverage to boost returns in recent years, driving their debt ratios to the highest levels in decades.”

Changing market trends will put a damper on these record profits, according to Bain. Globalization is reversing with recent trade wars and the pandemic exposing risks in overstretched, low-cost supply chains. Reshoring will, however, pressure corporate margins.

Labor market changes will also push up costs for companies. Corporations have long benefited from a steady flow of labor due to the baby boom, women entering the workforce, and the rise of offshoring; all three trends have either tapped out or reversed in recent years, however. Though the pandemic unemployment shock will offset this in the short term, many companies will struggle to find employees with the rights skills. 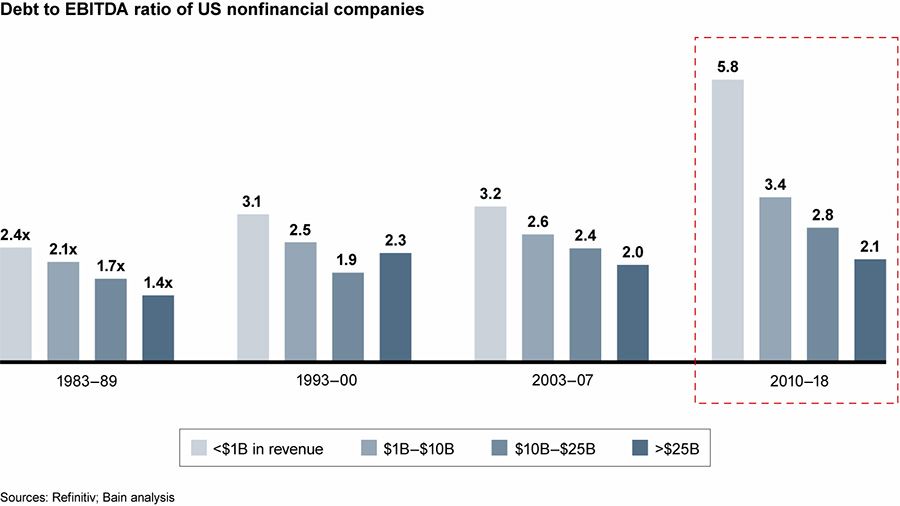 While an acceleration in automation and growth of internet platforms could continue to support high profits, these benefits will mostly go to the biggest companies, according to the report.

“On balance, these factors alone might not be enough to slow the corporate profit juggernaut,” said James Root, partner at Bain & Company in Hong Kong and co-chair of Bain Futures. “But there is a wild card that could dramatically reshape corporate return profiles as we emerge from this pandemic: an expansion in the role of the state.”

Skyrocketing corporate profits have coincided with rising income inequality and stagnant upward mobility, resulting in growing societal discontent. Meanwhile, government has expanded in response to crises such the 2008 financial crisis and the pandemic, intervening in the market and becoming an investor of last resort (including bailing out “too big to fail” firms, to the ire of populists).

With other huge challenges ahead, such as global warming and the human costs of automation (i.e. mass unemployment and a potential universal income), corporate profitability could be significantly decreased through regulation, taxation, and other interventions.